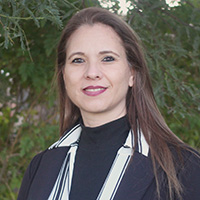 Ms. Aydee Tamez was born and raised in Monterrey, Mexico.  She received a Law Degree from the Universidad Autonoma de Nuevo Leon in Monterrey, Mexico in 1999.  She moved to the US in 2002 and has worked at schools in Texas, Indiana, and Arizona. She received her Montessori Training in Spanish first and, after some years, she decided to take it again, but in English. She received her AMS Montessori Early Childhood Certificate in 2018. She has been working in a Montessori Environment as a lead primary guide for almost 12 years.

Ms Aydee genuinely believes in the Montessori system and philosophy. She loves working with children and guiding them to maximize their unique potential. Her favorite Montessori quote is “Childhood is not a race to see how quickly a child can read, write, and count. Childhood is a small window of time to learn and develop at the pace which is right for each individual child.” .-Maria Montessori

Ms. Aydee is married and has three children. In her free time, she enjoys traveling, reading, photography, going to the movies and spending time with her family and friends.